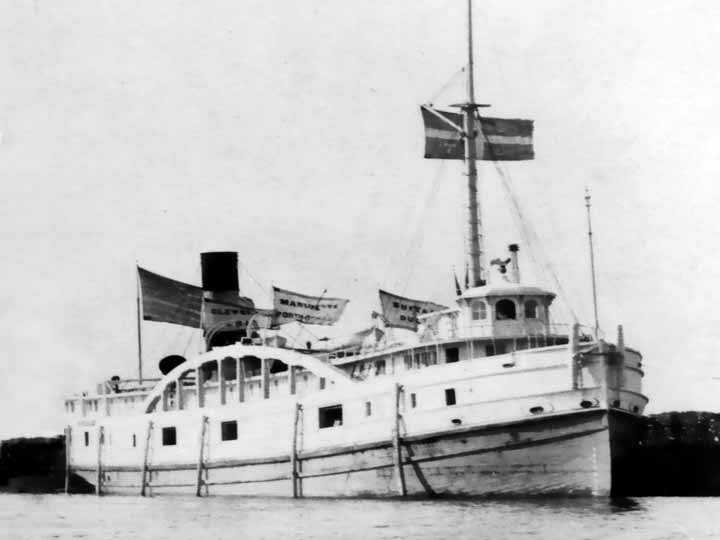 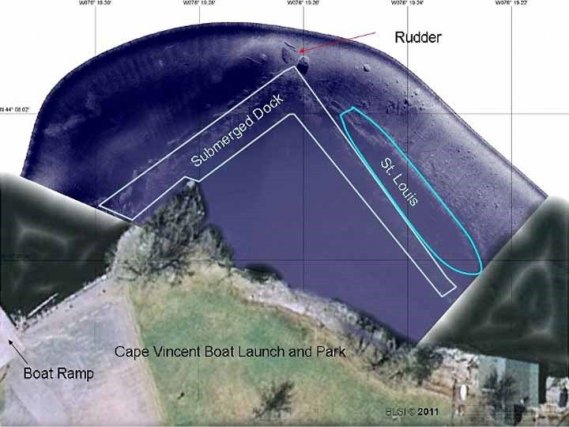 Launched near the end of the American Civil War, the

St. Louis was built and launched in Cleveland, Ohio, for the Buffalo & Detroit Transportation Company. With a single deck, she was part of a new class of steamships called “Propellers”, which replaced the side wheel as the means of propulsion for vessels.  The propeller, which was referred to as a screw, was driven by a single cylinder steam engine and boiler.  A single mast was mounted just behind the pilot house.  At 203 feet, with a beam of 31 feet, she was rated at 788 tons.  She operated mainly on the upper great lakes, until 1906, when she was rebuilt at Tonawanda, NY, as an unrigged barge and operated by Niagara Falls Paper Company.

n 1908, her ownership passed to the Atlantic Coast Steamship Company of Buffalo, NY. In February of 1914, she was abandoned as a total loss, at Cape Vincent, NY, where she had been stranded next to a dock, where she remains to this day. This is just beyond where the wood pulp dock was located.

Underwater, the scuba divers can see the remains of the lowest part of the vessel. Massive 2-foot diameter oak timbers run from bow to stern. These timbers were part of her conversion to a barge, allowing her to carry heavy loads.  Her rudder, over 12 feet long, still lays just behind the vessel.

- Thanks to Dennis McCarthy for the history of the St. Louis

If you need gear rental, please add the rental gear to your cart by clicking here. (Does not include tanks or weights)

If you need to rent tanks and weights, please add the tank rental to your cart by clicking here.

Cost:
$ 25.00
Guided dive. Does not include gear.
We offer flexible classes, dives and pool sessions designed to fit around your schedule.